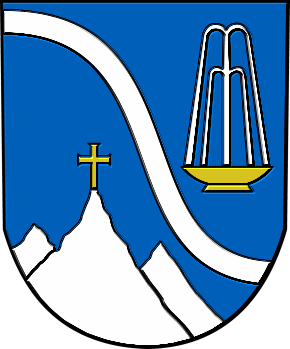 Szczawnica - The name of the town stems from sour waters called by the highlanders "sorrels". It is located in a picturesque Grajcarek valley of the right stream of Dunajec river between Strand of Radziejowa and Małe Pieniny at 430-560 m above the sea level, in the Polish - Slovakian border zone. It has been known as a spring. Its dynamic development as a health resort took place in the middle of the 19th century, when Józef Szalay, who built the first baths, erected new spring buildings and guest houses, created the architecture for the discovered springs: of Magdalena, Waleria, Jan, Szymon, Helena and Aniela, was the owner of the resort. He extended and modernized the Spring Park, erected the spring chapel. He invited prominent persons of the epoch to Szczawnica, among others the distinguished balneologist Józef Dietl. In 1962 Szczawnica was awarded the city rights by incorporating the neighboring villages - Szlachtowa and Jaworki. Szczawnica is the perfect starting point for foot walks in Pieniny Mountains. The health resort has 12 mineral waters springs. These waters are hydrogencarbonate, sodium, iodide, bromide sorrels rich with mineral salts and numerous microelements. Especially recommended in illnesses of airways, stomach catarrh, constipations, urinary diathesis, arterial sclerosis, with high cholesterol levels, osteoporosis.

Szczawnica is located in one of the most picturesque parts of Poland, on the border of the Pieniny and Beskid Sądecki Mountains, at the altitude of 430 - 500m metres above sea level. Its unique microclimate and mineral water resources made Szczawnica a well-know health resort as early as 19th century. Mineral waters and treatment offered support the therapy of numerous diseases. 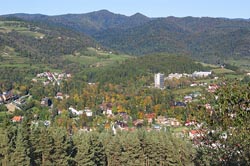 In addition to its resources as a health resort, the city offers plenty of tourist attractions all year round. It is an ideal place to pursue active recreation and explore the value of nature and landscape of the Pieniny mountains. There are plenty tourist routes and hiking and bicycle trails that will take you to picturesque parts of the Pieniny National Park and nature reserves. Szczawnica features excellent areas for horse-riders, water sports,

paraglider and angling enthusiasts. The attractions of the city include a chair-lift up to the peak of the Palenica Mountain which offers a breath-taking view of the Tatras and Pieniny Mountains. In winter, Szczawnica, with its numerous ski-lifts, turns into a great attraction for skiing enthusiasts. As the city is situated near the state border, pedestrians and cyclists can use a border-crossing to visit the Slovak part of the Pieniny. One of he major attractions of Szczawnica, the gorge of the Dunajec river, is a wonder of nature. A trip down the Dunajec gorge by highlanders rafts is an unforgettable experience. Szczawnica, a wonderful spa and a thriving tourist resort, is an excellent place to spend holidays, for anyone, at any time!

Dietla Square. Development of the Dietl quare is an example of 19th century Polish health resort architecture with slight impact of western art. At the entrance to the Dietl square there is the "Old Chancellery" building. The place of the first spring house was occupied in 1964 by villa "Palace", with a beautiful clock tower in the southern section. In 1880 the building was transferred to the Skills Academy. Until 1939 it performed the role of a hotel, and then "Zdrojowa" restaurant. Since 1971 the seat of the Pienińskie Museum of J. Szalaya has been located in the building - a place, in which enthnographic-historical collection of the region are presented. Góry Park of count A. Stadnicki, established by J. Kutschera, and then extended and re-developed by J. Szalaya is adjacent to the Dietl Square. He brough in many species of rare trees. In the upper part of the Park, there is a larch tree-stand erected in 1909 - 1911 from seeds brought in from Tokyo. At the edge of the Park, behind the "Szwajcarska Górka [Swiss Mountain]" there is the spring chapel of the Holy Mother Queen of Heaven. Next to the chapel grows an old larch, which was declared a monument of nature. Just opposite to the chapel there is the concert hall erected ca. 1950, in which concerts for the patients took place. The western corner of the Dietl Square is the "Pod Bogarodzicą" house built in 1853 by Szalay. The northern part of the square is occupied by villas "Holenderka" and "Dom nad Zdrojami". Also the monument  bust of the health resorts creator Józef Szalay, shown for the first time on 12.05.2002, turns attention.

login
SEARCHER
Szczawnica on the map